Balicasag Island is where you will find a 400 meter Marine Sanctuary of healthy corals with plenty of pelagic visitors characterized by vertical walls over deep waters with strong currents.

A dive in December or January can offer treats of Hammerhead Sharks and sometimes Whale Sharks. A sandy shell coral line beach surrounds the island, which in turn, is fringed by a narrow reef shelf, 30-165 ft/10-55m wide. The shelf, which is 15-25ft/3-8m deep, terminates into a perpendicular underwater down to depths beyond 250ft/83m on the north and northwest face of the reef. alona beachThe top of the submarine cliffs are covered with the hard coral while lower levels are covered with sponges and gorgonians. A thriving fish community is found around the cliff area. Here, jacks, mackerel and barracudas are seen in abundance.

On the south and southwest portions of the shelf are wider and grades down to 60-70ft/20-23m. The slope is covered with wide patches of hard and soft coral. The submarine cliffs are indented with caves and overhangs where large groupers, napoleon wrasses and snappers hide. 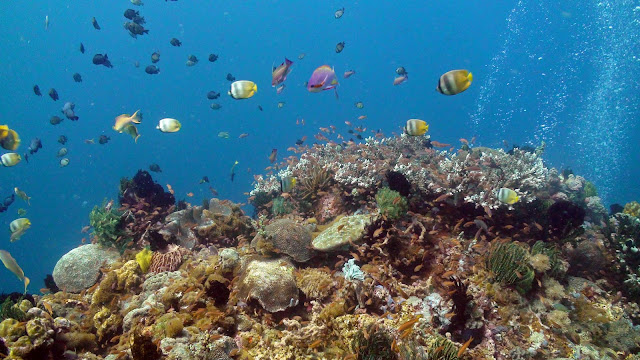 Some six kilometres to the southwest of Duljo Point, Panglao, lies Balicasag Island. With its area of about 25 hectares, you can walk all the way around it in about 45 minutes. The island itself is pretty much as you would imagine a deserted tropical island: a flat, circular island covered with palm trees and flowering bouganvillea, and surrounded by a white beach, however, you can get there by banca in about 45 minutes from Panglao.

It isn't deserted also. The local community consists of about 100 families. Most are fishermen, but many nowadays also earn a living by collecting shells to sell to tourists. On the middle of the island, you'll find a small lighthouse tower. There is a single resort on the island. It covers about 1.5 hectares on the south side and has 20 traditional-style bungalows lining the beach.

Around Balicasag Island, you'll find some of the best diving locations in the Philippines. Just in front of the resort, on the south side of the island is also some 400 meters of successfully protected marine sanctuary.

All dive centers in Balicasag

All dive sites in Balicasag